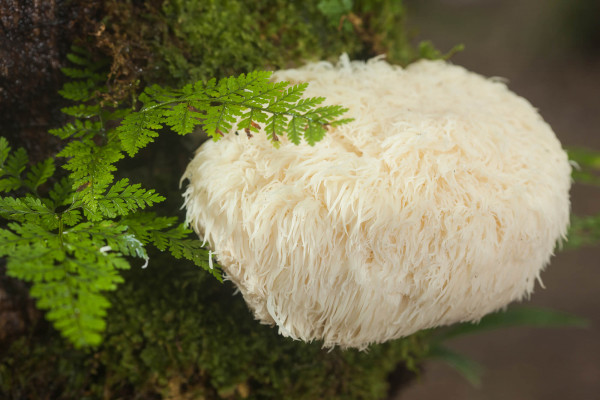 The lion’s mane mushroom is also known as a monkey head mushroom, or pom-pom mushroom because of its striking appearance.

The white-beige fruiting body of the mushroom is 5-40 cm tall; a short stem supports a cap which is covered by many soft and dense, 2-5 cm long spines. It is native to the entire northern hemisphere, although rare, and grows preferentially on very old beeches and oaks. In China, the hedgehog goatee has been cultivated as an excellent edible and vital mushroom since the 1950s and likewise in Europe because of its exquisite flavour - not unlike lobster - and its meaty texture making the mushroom a delicacy among gourmets. Thirty-two different substances are responsible for its aroma, much more than in button mushrooms or oyster mushrooms.

In traditional Chinese medicine, Hericium harmonizes the five functional cycles of the heart, lungs, spleen, liver and kidney. It is considered to be particularly important as a tonic for the entire digestive tract as well as for the nervous system. The fungus is also used for stimulating the immune system and cancer prevention.

Hericium is rich in nutrients and vital substances, as it contains almost all amino acids essential for humans, many vitamins, minerals and trace elements as well as abundant polysaccharides and polypeptides, which are believed to increase immune function and inhibit the growth of malignant cells. The Hericinone and Erinacine contained in the hedgehog goatee make the fungus unique. These highly active substances are able to cross the blood-brain barrier and can therefore act directly on the brain and nervous system. There, they activate the protein complex called NGF (nerve growth factor), which is responsible for maintaining and developing our nervous system.